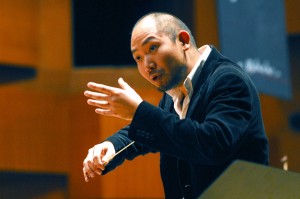 In a cover article in 2009, the international opera magazine Orpheus described Jimmy Chiang under the title, “Versatility comes through Hard Work, Discipline and Respect!”  Chiang is a well-rounded musician who masters a great variety of musical skills.  As a solo pianist, he delves deeply into the music and loves each note as if it were his own (Schorndorfer Nachrichten).  As an orchestra and opera conductor, he “animate[s] the orchestra… and carrie[s] the singers as well as the choir in his hands” (Orpheus, 2011).  He was the first prize winner of the 2007 “Lovro von Matacic” international conducting competition in Zagreb.  In 2013, Chiang was appointed as Kapellmeister of the Vienna Boys’ Choir, becoming the first Hong Kong born Chinese conductor to ever hold this title in the choir’s 500 years of history.

From his origin in Hong Kong, to his education in the United States, to his education and residency in Vienna, and to his travels around the world, Chiang represents the intersection of many cultures and styles.  As an Austrian citizen who has now lived in Vienna for the past 20 years, the language, culture, and music are Chiang’s own; without a doubt, “one associates him with Vienna” (Lübecker Stadtzeitung).  He masters an enormous musical repertoire, ranging from Gregorian to living contemporaries.  He is fluent in German, Chinese, English, and is proficient in Italian as well.  He embodies a great many different perspectives, all within himself.  Through his multifaceted expertise, Chiang is uniquely able to understand a piece of music from various perspectives.  Chiang represents the intersection of versatility and mastery.

Chiang was born to a family of musicians; his father was a flautist and his mother a mezzo-soprano and choir director.  Chiang discovered his own passion for music early in life, beginning piano lessons when he was four.  As a teenager, he studied violoncello and composition.  At the age of 13, he made his first public appearance as a concert pianist with the Hong Kong Pan Asia Symphony Orchestra, in which he was also a cellist from 1994 to 1996 and has been its principal conductor since 2008.  He went on to receive his Fellows Diploma in piano performance from the Trinity College of Music London at 16.  He graduated with a Bachelor of Music degree from Baylor University in the USA, where he studied with the renowned pianist Krassimira Jordan of the Russian piano school and the legendary Polish-born Jewish conductor, Daniel Sternberg.  He continued his education and obtained a Magister Artium degree with distinction at the University of Music and Performing Arts Vienna; there, he was a student of German pianist Wolfgang Watzinger and the last student of Leopold Hager, the legendary Austrian conductor who has been recognized for his expertise and authority in his interpretation of Mozart’s music.  In 2003, Chiang studied with Seiji Ozawa and appeared at the Rohm Music Festival in Kyoto, Japan upon the maestro’s invitation.

Chiang’s performing career as a soloist, collaborative pianist, and conductor has brought him to prestigious stages and festivals across the world.  He has performed at the Wiener Musikverein, Carnegie Hall, Komischen Oper Berlin, Suntory Hall in Tokyo, the Schleswig-Holstein Music Festival, FACYL in Spain, and the Macao International Music Festival, among others.  In 2016, he became the first artistic director of a newly founded Hong Kong-Vienna Music Festival.  Chiang brought the festival to its climax by leading the top musicians from both metropoles in a stunning performance of Gustav Mahler’s 8th Symphony.

Chiang’s foremost passion is opera.  From 2007 to 2009, he worked as assistant music director of the Wagner “Ring” cycle at Theater Lübeck; during the summer seasons, he was assistant music director of opera productions at the Eutin Festival.  From 2009 to 2011, he was the principal conductor at Theater Freiburg.  There, he directed numerous premiere productions, including a howling success of Ligeti’s opera Le Grand Macabre with stage director Calixto Bieito.  In 2021, Chiang became the principal guest conductor for the Taranto Opera Festival and has directed several successful opera productions.

Orchestras that Chiang has worked with include the Radio Symphony Orchestra of Vienna, the Vienna Chamber Orchestra, the Zagreb Philharmonic, the Orquesta Sinfonica Castilla e Leon, the Hong Kong Philharmonic, and more.

Chiang appeared with the Vienna Boys Choir in two CD albums under the Deutsche Grammophon label.